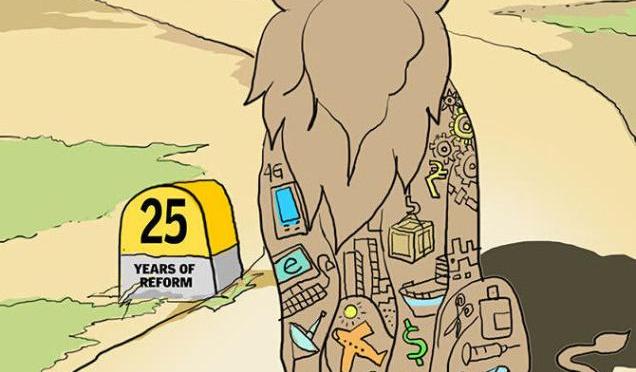 From a beggar of financial aid to one of the global economic powers, from a socialist economy to a capitalist inclined economy, from following a restrictive trade to practising a free trade, this transition has been dramatic. Dramatic yet progressive. It has not been an easy task. The LPG (liberalisation, privatisation, globalisation) reforms caused a myriad of changes in the economic structure of India.

Surprisingly, this was a reform taken by a PM who had been a socialist by heart and principles. This huge step was taken to ease the lump some debt that India owed to IMF. Devaluation of currency, foreign investments, and increased exports are some effects of the reforms.

Why the Indian government initiated these reforms-

Rajiv Gandhi was assassinated in 1991, this was also a time when the foreign debt was piling up and the investors lost confidence, which led to the Indian economy on a verge of economic bankruptcy. PV Narsimha Rao stepped up as the PM with Manmohan Singh as the Finance Minister(though an economist). The balance of payment crisis was a big concern to the government. The overvaluation of the currency had a gargantuan impact in the 1991 crisis.

This was not the only problem. The foreign reserves started vanishing so fast they were at such a point that it would last only for less than 3 weeks. The Gulf War made the BOP swell and the oil bill skyrocketed. All this led to decrease in exports which was supported by the fall in the USSR- a major trade ally of India at that time. The gross fiscal deficit rose against 12.7% of the GDP. This was a major problem as the productivity of the workforce and the growth was not enough to cater to the deficit. Redtapism, and bureaucratic hurdles caused in the low establishment of private industry firms. So, all these caused in the downfall of Indian economy. We see a big transition from socialist to a mixed economy.

The government had to take big steps like devaluation of currency, easing the rules and regulations for private sector industries and abolition of licence raj.

Currency Valuation-
These reforms led to freeing of the exchange rate. This was a huge step that the Indian economy took in reference to foreign investments. Rupee value is from then on determined by the market forces and a slight intervention of the central bank. Now India is well connected with the world due to healthy trade and investment. Ultimately, the exports increased for various goods due to depreciation in our currency. In the due course our depreciated currency may appreciate due to increased trade and connectivity.

Abolition of License Raj-
The term license Raj may not be a familiar term now, but it was extensively used before 1991. The government had control over the industries and the industries had to take permission for every change they made or every action they wanted to take in the course of its operation. Because of these strict rules Private Sector was limited to a very few industries and the productivity of these few was low when compared to the global progress. Post these reforms, the Monopolies and Restrictive Trade Practices Act(MRTP) was abolished- according to which the large scale companies had to comply with the Act when they plan on diversification or expansion. Furthermore, industrial licensing was eliminated in all except 18 industries(doesn’t even sum up to 20%).

Foreign Investment –
Foreign investments were almost nil prior the reform period. This was due to the unwelcoming policies adopted by institutions. However, after the easing of economic policies, 51% of the equity for a few industries was granted for foreign direct investment(FDI). It further rose to 74% and subsequently to 100% for a few industries. The government setup Foreign Investment Promotion Board(FIPB) which is a single clearance window for applications on FDI.

Trade-
India’s trade found a new trajectory with the implementation of LPG reforms. India had a Foreign Exchange Regulation Act(FERA),-which imposed restrictions on outward flow and inward flow of currency- violating which was a criminal offence. Now, India has full current account convertibility; this means that rupee can be exchanged with other currencies to buy goods and services from other countries. India also has partial capital account convertibility. There was also rationalisation of tariffs on import goods and removal of restrictions pertaining to trade.

Socialistic to Mixed Economy-
Socialism started as a part of the Indian Independence Movement against the British. The common citizens were perplexed by the zamindars’, princely class’ and landed gentry’s dominance over the economy. From then to until 1991 the Indian economy remained socialist and as per the Constitution it still is. But, after the Soviet Union fall and Gulf War India’s economic outlook took a U- turn to a mixed economy. Privatisation marked this change. It holds good for a country with huge population like India, because the private sector takes care of most of the business aspects and government can focus on the mainstream economic problems.

Banking Sector-
Before 1991, Indian banking sector did not even have a shade of private entrepreneurship. The banks did not mention about their profits and losses. There have been significant changes in the cash reserve ratio(CRR) and statutory liquidity ratio(SLR) aftermath of the reforms. The banking sector is now more flexible, well regulated and suffices most of the financial needs of people.

Stock Markets-
Stock markets have been redefined after 1991. It found its ground through the major stock exchanges in our country like NSE and BSE. Many services related to this like Asset Management, Hedging Services, Investment Banking have started coming up. Employment generation has also been a major advantage of the stock market boost.

Have income inequalities been reduced? Are the poor people still suffering from something called poverty? Are all the middle class households immune to inflation? Can the poor farmers avail loans or credit whenever they need? Are all the children of this country educated? Is child labour still a problem? These are the questions we have to focus upon.

Yes, we are able to earn more. But, the income gap still persists the rich are able to earn more faster than the poor. Though, this holds good to some households. The Indian domestic industry especially the small and the micro enterprises are the worst hit due to globalisation. Most of the unskilled labourers still work for low wages in risky conditions. The real wages are low due to inflation rates and other macroeconomic factors.

There has been an overall progress, but it may not be progressive or advantageous for every person in the country. After all, we have to bear the opportunity cost of these reforms. Economics is so complex, everything is interrelated and interconnected. It may hold good for one but can lead to an adverse effect on the other.

Go to our RECRUITMENTS page here Please note-This is an UNPAID OFFER.